The Rockland Post 130 Junior team came to Utica for the NYS Championship Tournament with a single loss on their record for the season.  Rockland swept through their pool to face Whitestown Post 1113 in the Championship game.  Whitestown had their perfect season intact and was looking to finish the perfect season with a win and a State Title.

Rockland had other ideas, jumped out to 6 run lead in the first inning and Whitestown couldn’t recover.  Rockland avenged their loss in the 2018 Championship Game and were crowned the NYS Junior State Champions.

For the first time ever, the NYS Junior Champions were going to advance to the North East Invitational Regional.  Rockland hit the road to Concord, New Hampshire to pursue the regional championship.

Rockland defeated the hometown New Hampshire Runners up 6-4 in their first game.  Their second matchup was against the Maine Champions, which Rockland handled by a score of 7-4.  This put Rockland in the regional championship game against the New Hampshire State Champion.

The New Hampshire State Champion had won both their previous games in extra innings (8 innings and then 10 innings).  The finals did not break the streak.  New Hampshire scored 3 in the 7th inning to tie the game.  In the bottom of the 8th, Rockland Mike Reilly drove i 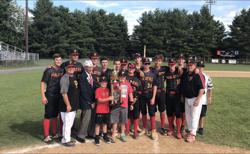 n the winning run to win the title in walk off fashion.

There is no National Junior Legion World Series so Rockland Junior season ended right there.  Not many teams are able to say they won their last game of the season.